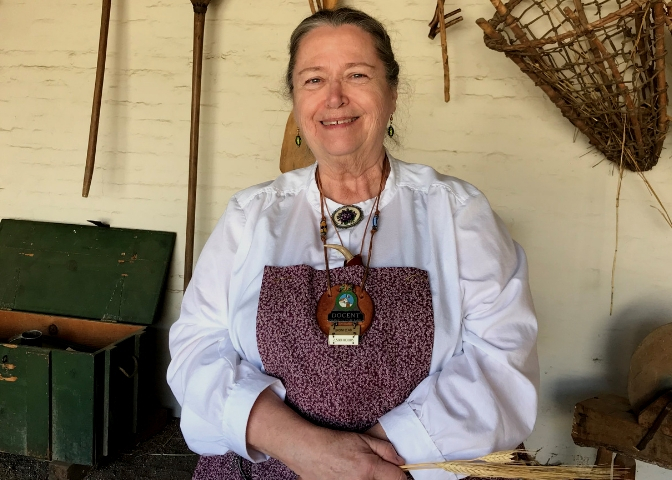 Carol Toyama (also known as “Ironhead” has been cracking jokes and spreading smiles at Sutter’s Fort SHP since 2007. California State Parks recently awarded Carol with the California Poppy Award, recognizing her exceptional volunteer service at Sutter’s Fort SHP. Thank you for your humor, hard-work, and for your 3,065 hours of volunteer service at the park.

How did you get involved?

In 1997 a friend invited me to bring my daughters and join her and her daughter for a Pioneer Demonstration Day at Sutter’s Fort. I was completely blown away by a demonstration on pioneer women’s clothing given by a docent named Katrina. I referred to it for years as a pioneer striptease. Ten years later, after taking my older daughter off to college out of state, I was reading a local paper and saw an article announcing an upcoming docent training class for Sutter’s Fort. I applied and the rest, as they say, is history.

What’s your favorite part of volunteering?

My favorite thing is working with Jared Jones on the Environmental Living and Environmental Studies programs when fourth-graders visit Sutter’s Fort. Those two programs are for students to have a full living history experience. Each student will research a historical figure from 1846, and portray that character while spending a full day (ESP) or staying overnight in the ELP program. I’m a retired school secretary and the fourth graders have always been my favorites. They are smart and funny. They are old enough that they can be independent, but not yet quite as “hormonal” as some fifth and sixth graders can be.  They are willing to dress up and pretend to be the historic characters associated with Sutter’s Fort, without thinking it’s too nerdy or uncool.

My second favorite thing is being on the cannon crew.

What is it that you do in your role as a Sutter’s Fort volunteer?

Jared introduces me as his assistant, but I consider myself just another pair of eyes on the playground. I interact with the kids in the program, make sure parents know where their stations are when they arrive, answer questions, and generally help out wherever I’m needed. I try to keep an eye out for the safety of the kids as well as the safety of the Fort and the artifacts we have on display there. The Fort is always open to the public, so during the ELP and ESP days when students from other schools come to visit, I try to open up a room or activity that isn’t being used by the ELP/ESP students so those other students who are visiting get to have some hands-on experience of their own. I also train the ELP/ESP parents in Laundry, Rag Dolls, and Corn Husk dolls, and on occasion have trained the Grist Mill and the Historic Trade Store.

What’s one of your favorite memories?

Several years ago, when I was a park aide, an actor came to visit Sutter’s Fort.  He played a character on the Doctor Who series and later the lead in a series called Torchwood that was a spinoff based on that same character from Doctor Who.  I had been a fan for years, so when I saw him standing near the covered wagon where I was stationed, I couldn’t believe my eyes. I figured I could look away for a second and when I looked back it would just be some guy who looked like him.  It wasn’t just some other guy, it was the real deal. I turned into a teenaged girl in my head for about half a minute before I got hold of my self and remembered he was a paying visitor who was there because he was genuinely interested in history. He told me he and his partner had just driven the entire length of the California Trail all the way from Independence, Missouri. We had a nice visit, discussing our covered wagon, the history of Sutter’s Fort, and his interest in the Donner Party and other California History.  Pretty soon fans started showing up because he had posted his visit along with a photo of us together on social media, and I had my 15 minutes of fame – by association.

What do you like to do in your spare time when not volunteering?

I just enjoy being retired. Other than three days a week at the fort, my time is pretty unstructured. That gives me the opportunity to be spontaneous. I can decide to go to lunch or a movie with friends, take road trips if I want to. I like to read, and I do some sewing from time to time. I try to keep a summer garden.  My husband will be retiring this coming spring and I’m hoping we will do some traveling. Our daughters live elsewhere, one in Kansas City and one in Boston, so I’m hoping to be spending some time with them. My main bucket list item is to visit all the Presidential Libraries.  I’ve been to five, so I’m hoping to add a few in the next year. My husband and I spent several weeks in Japan last October and we are talking about going back next year, or we might just go to Europe. I’m not sure what we’ll be up to, but it will be fun to find out.

Thank you “Ironhead” for all that you do!

We are proud to support the volunteer efforts at Sutter’s Fort SHP with the help of our sponsor, Sutter Health.