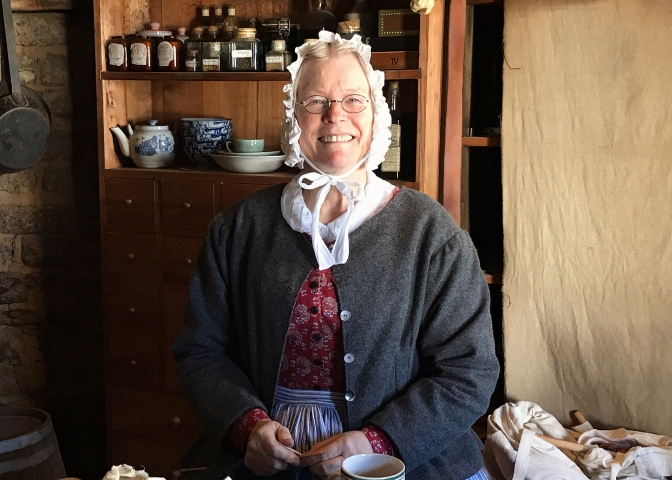 Eileen Hook (also known as Mrs. Talbott) has been a docent at Sutter’s Fort State Historic Park since 1980. Her love of interpretation and history at Sutter’s Fort has provided visitors with a lifetime of memorable experiences.

How did you get involved?

I saw a demonstration of first-person interpretation at a workshop in 1979 and was immediately hooked. In June 1980, George Stammerjohan and I started the Sutter’s Fort Living History Program. I am the last of the original living history docents still active at Sutter’s Fort! I became an “official docent” with the first docent class in 1982/1983.

What’s your favorite part of volunteering?

Sharing the information I have learned through research and demonstrations of heritage skills.

What is it that you do in your role as a Sutter’s Fort volunteer?

I started out in the Immigrant Room as a pioneer woman and mother. Later I moved to the kitchen as an assistant cook and am now in the Period Trade Store as the storekeeper’s wife, I interpret the astonishing array of goods from all over the world that were available to early California residents.

I am also the lead volunteer trainer for the women’s clothing section of the Docent training classes.

What’s one of your favorite memories?

As I have been active at Sutter’s Fort since 1980, I have a whole lifetime of memories to share! Here are just a few:

What do you like to do in your spare time when you’re not volunteering?

I am continually doing research on pre-Gold Rush California and immigrants’ journeys west. I hope to write a book from the woman’s point of view.  I also do a lot of sewing as I have a small side business making period attire for early to mid-19th-century re-enactors.
Thank you, Eileen, for your friendship and guidance over the years, and for your 5,174 hours of volunteer service!

We are proud to support the volunteer efforts at Sutter’s Fort SHP with the help of our sponsor, Sutter Health.